From the arrival of the First Fleet in 1788, settlement had been confined to the coastal strip around Sydney, because no way could be found across the Blue Mountains to the west. In 1813, following several attempts by others, Blaxland, Lawson and Wentworth found a passage to the western plains by following the top of a ridge. It was a difficult journey, often through thick scrub and steep country, and sometimes it was difficult to find grass for the horses to eat.

Blaxland described the start of the journey:
"On Tuesday, May 11, 1813, Mr. Gregory Blaxland, Mr. William Went worth, and Lieutenant Lawson, attended by four servants, with five dogs, and four horses laden with provisions, ammunition, and other necessaries, left Mr. Blaxland's farm at the South Creek [near the present town of St Marys], for the purpose of endeavouring to effect a passage over the Blue Mountains, between the Western River, and the River Grose. They crossed the Nepean, or Hawkesbury River, at the ford, on to Emu Island [this sand island disappeared some time later], at four o'clock p.m., and having proceeded, according to their calculation, two miles in a south-west direction, through forest land and good pasture, encamped at five o'clock at the foot of the first ridge. The distance travelled on this and on the subsequent days was computed by time, the rate being estimated at about two miles per hour."

Towards the end of their journey, Blaxland had this to say:
"The party encamped by the side of a fine stream of water, at a short distance from a high hill, in the shape of a sugar-loaf. In the afternoon they ascended its summit, from whence they descried all around, forest or grass land, sufficient in extent in their opinion, to support the stock of the colony for the next thirty years. This was the extreme point of their journey. The distance they had travelled they computed at about fifty-eight miles nearly north-west; that is, fifty miles through the mountain, (the greater part of which they had walked over three times,) and eight miles through the forest land beyond it, reckoning the descent of the mountain to be half-a mile to the foot."

The three men were landowners in the colony. 1813 had been a dry year and more land was needed to feed all the people who were arriving in Sydney. Their trip was therefore very successful.

The opening up of a way across the mountains and the establishment of a new town at Bathurst paved the way for inland settlement and enabled the carrying out of exploration which went on for more than half a century. With the completion of the railway across the mountains, and upgrade of the road, both of which closely follow the route of Blaxland, Lawson and Wentworth, the population west of the mountains quickly grew.

A view of the steep and rugged Blue Mountains near Katoomba (photograph). . . 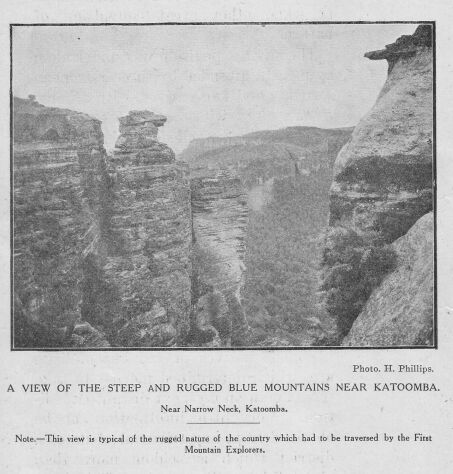